Last week, the Texture Guide to Frank Zappa took us from Freak Out! to Apostrophe (‘) in one fell swoop. In part 2, we traverse the rocky territory of the 1970s to ’90s.

What I failed to mention in the previous article is that Zappa spent the better part of the mid-70s working with the most musically dexterous incarnation of his backing band yet (a loose group of musicians that generally included George Duke on keyboards, Ruth Underwood on percussion, Tom Fowler on bass and his brother Bruce on trombone). This is particularly important to keep in mind, because on Roxy & Elsewhere he really puts them to the test, tossing out some of his most mind-meltingly complicated compositions ever.

What keeps this from being just an empty display of muso wanking, however, is the fact that in addition to playing these songs perfectly, the band makes them swing, infusing them with a spontaneity and vitality that makes it sound like they could do this sort of thing in their sleep. The scary thing is, they probably could. The scarier thing is, they did it live.

HERE, START WITH THIS: “Don’t You Ever Wash That Thing?”

What to get next: One Size Fits All retains much of the same lineup and, for those with more delicate sensibilities, is one of the few Zappa albums without any gross-out humor or perverse sexual references in the lyrics. That the songs are all top-notch doesn’t hurt, either.

From this point on, every Zappa album with vocals followed the exact same formula: loud rock music with questionable lyrical content and a few muso-baiting instrumentals thrown in for good measure. One could argue that 1976’s Zoot Allures set the template, but it’s Sheik Yerbouti that takes it to its furthest extreme: it’s filthier, fiercer, funnier, and guaranteed to offend absolutely everybody.

It’s also got some of Zappa’s best and most singable melodies, even if they’re in the service of lines like “Don’t fool yourself girl / it’s going right up yer poop chute”. Musically, this is as straightforward as Zappa ever got, but the supernaturally energetic backing band assures that there’s never a dull moment. Incidentally, this is the album that introduced the world to art-rock guitar god Adrian Belew and gigantic drum set enthusiast Terry Bozzio (who spends a good portion of the album screaming his lungs out).

HERE, START WITH THIS: “Broken Hearts Are For Assholes”

What to get next: Joe’s Garage, because if you can stomach songs like “Bobby Brown Goes Down” and “Jewish Princess”, chances are you’re ready for a rock opera with 10 minutes of robot-fucking.

Turning the perverse humor down a notch, Zappa returned to barbed social satire on You Are What You Is, this time targeting youthful indolence, yuppie self-absorption, and organized religion with a ferociousness that borders on blood-thirsty. Zappa clearly entered the ’80s more frustrated and pessimistic than ever, and it seems the mean-spiritedness that marked his late-’70s novelty-rock albums had now finally found some worthy targets.

Still, in spite of the sour aftertaste, this is easily one of Zappa’s best lyrical offerings, and the extra effort he seemed to have put in the words gives the hyper-caffeinated, ADD-addled music a focus that differentiates it from the “throw-everything-against-the-wall-and-see-if-it-sticks” quality that mars even some of his better efforts. And of course, this being a Zappa album, a lot of it is funny as hell.

HERE, START WITH THIS: “You Are What You Is”

What to get next: Zappa followed YAWYI with Ship Arriving Too Late To Save A Drowning Witch, a comparatively lightweight effort that benefits from being one of the most immediately likable, casual-sounding albums in Zappa’s discography. Six songs, no filler, and a slight New Wave aftertaste (yes, it’s the one with “Valley Girl” on it). 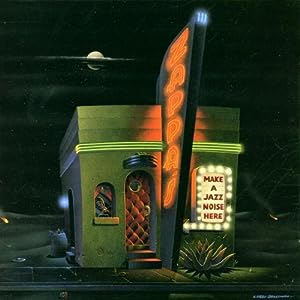 9. Broadway The Hard Way/The Best Band You Never Heard In Your Life/Make A Jazz Noise Here (all from 1988)

After spending the bulk of the ’80s in a depressingly self-indulgent creative rut, Zappa released a trio of live albums featuring some of the best music of his career. Though his 1988 touring band didn’t last too long due to internal politics (i.e., infighting), they were hailed by many fans as one of the most talented he’d ever assembled.

Of the three albums, Broadway The Hard Way focuses most on political satire, The Best Band You Never Heard In Your Life is concentrated more towards crowd-pleasing fan favorites (and some exceptionally weird covers), and the mostly-instrumental Make A Jazz Noise Here focuses on just how well this band could play the complicated stuff. Though Best Band is the easiest place to start, the medley of early Mothers material on Make A Jazz Noise Here has to be heard to be believed. Oh, and did I mention this lineup featured a full five-piece horn section?

HERE, START WITH THIS: “Stolen Moments”

What To Get Next: If you get all three of these albums and still want more, you might as well go the whole hog and delve into the exhausting six-volume You Can’t Do That On Stage Anymore series, a comprehensive collection of rare live cuts that spans Zappa’s entire career.

DON’T GET THIS FIRST. This is the FZ master class, the final exam, a monolith of musically uncompromising darkness that stands in stark contrast to everything else the man ever did. Composed almost entirely on Synclavier during the last years of Zappa’s life, Civilization Phaze III is an “opera-pantomime” that seems to allegorically describe where he thought society was headed. It isn’t pretty.

The nightmarish dystopia described in the libretto is perfectly articulated by the music, a creepy, discordant, borderline-incomprehensible polyrhythmic collision of otherworldly, computer-manipulated instrumental tones. Though it sounds like pure chaos on the surface, the truth is that Zappa had never been so firmly in control of his own musical vision, even as his body was succumbing to the later stages of prostate cancer. Not all of it works, but it’s hard to fault what essentially amounts to Frank Zappa’s musical last will and testament.

What To Get Next: Next? You’ll be lucky if you even find this one. Nevertheless, The Yellow Shark, Zappa’s second-to-last album, features his orchestral compositions being played by the Ensemble Modern, one of the few groups of musicians who took Zappa’s orchestral music seriously enough to do it justice.